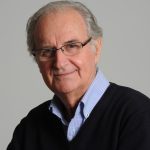 Vasilios N. Tsolakis was born in Tirnavos, where he finished primary and secondary education.

In 1967, he began his professional activities in Larisa, where he worked freelance until 2007, and was involved in various projects in both the public and private sector.

Peneus, which is considered as being our own river, is so much, and so popularly, sung that no other river has been done so. Real facts of life and various myths are entangled together creating a unique and outstanding image of this river that has retainrd its own image through the centuries.

According to Mythology Peneus was a River-god, like so many other rivers which have been personified by human thought.

The Peneus river of Larissa begins its long trip to the Aegean Sea from a very, very, long distance. It looks like a very long snake which crosses the plain of Thessaly rather idly, for it knows that it has got to go through precipitous mountain-sides which engulf its own waters within their straits. It is the sort of river which easily swells and causes extensive floodings but it also has a smile to give to those living nearby.

These days Peneus is making a desperate call for help. The rescue, however, can only come from people themselves who live near it. They must show their love and concern about the river and their determination to respect and protect it. It is our duty to do so as an obligation towards the river itself and to the natural environment as a whole. The least we can do now is to remain optimistic and hope that this will, somehow, be done.